Kelly Zielinski has called sunny San Diego her home since moving to America’s Finest City when she was 12 years old. Going to school for marketing and communications, she completed her degree at the University of Phoenix, while spending time at San Diego State University and Cal State Monterey Bay. 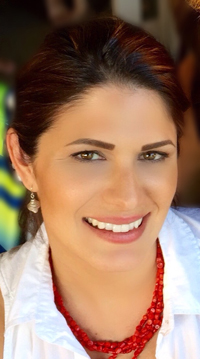 Prior to joining TargetSolutions more than four years ago, Kelly’s career began at NBC as a writer for newscasts. Kelly then spent seven years in account management business development with Worldwide Express where she worked her way up to National Director of Business Development.

When not in the office, you can probably find Kelly reveling in the great outdoors either on a scenic hike, in a kayak, or visiting one of San Diego’s beautiful beaches. Above all else, Kelly enjoys spending as much time as possible with her husband, Jason, and sons Van, 5, and Nolan, 4 months.

Here is a Q & A from a recent conversation with Kelly:

What is your favorite and least favorite food?

If I had to eat it consistently and take everything else off the menu, I’d pick Italian food. If I had to pick a dish, it’s pizza. I don’t think pizza ever sounds bad. My least favorite food is ribs. Any food that takes a really difficult amount of time to eat and consume – and is that messy – is too much.

Who is your hero or role model?

My mom. The challenge in life is always to find a balance in things; give to your family, give to your job, give to your community. I don’t know that I’ve ever met anybody who does a better job of it than her. She has a very important role at the Goodwill of San Diego County. She’s their executive vice president. She built that career after the kids were a bit older so she didn’t get an early start and she’s managed to do an amazing job. She finished her bachelor’s degree as an adult, in the mix with everything else she had going on. People have a deep respect for her and people who know her are better because of it. I think everything she touches, she makes better.

Who are your three favorite bands and/or singers?

Aerosmith, hairbands, early 90s rap (i.e. Straight Outta Compton crew), opera (Pavarotti). Any music that sounds good, regardless of genre, I like it! My playlist for this morning is a lot of Van Halen and Poison.

If you were on a desert island and could bring any three things with you, what would they be? (The island graciously provides water and food, and no other people are allowed)

A device to play music, a separate change of clothes, and my bed. I have a great bed.

Primal Fear for sure. Hands down, the best movie! I love movies that you can’t figure out. I love movies where you don’t know about the twist and that one at the end when he’s sitting in the cell and Richard Gere turns around, it’s just great.

From The Shawshank Redemption: “Hope is a good thing, maybe the best of things.”

TargetSolutions’ Water Industry Hydraulics Training Course Provides Engaging Overview
Introducing TargetSolutions’ All-New Reports Application – Now Available!
Recent Posts
Categories
0
0
0
0
We use cookies to ensure that we give you the best experience on our website. By continuing to use this website, you agree to the Terms and Agreements in our Privacy Policy.OKPrivacy policy