Creating a Healthy and Fit Culture for Your Fire Department

Since 2007, firefighter Aaron Zamzow has served as a firefighter and EMT with the City of Madison Fire Department in Wisconsin. He is also an author and certified personal fitness trainer. He began his career, however, in the fitness industry at 18 years old. He has worked with elite athletes and studied under some of the top trainers in the world. Zamzow believes diet and exercise are foundations for a healthier fire department culture.

We recently spoke with Zamzow about how the fire service can create a healthier culture, a topic he presented on at Firehouse World in San Diego this past February. Here is the Q-and-A:

Firefighting is a physically strenuous job, but when you say “creating a healthy and fit culture,” that implies something needs to change. What do you think needs to change?
It seems 99 percent of the budget that most cities have is spent on PPE (personal protective equipment), which is necessary, but only 1 percent is spent on the health and wellness of those operating the equipment, and that seems backwards.

What diseases or conditions put firefighters at risk due to their occupation?
PTSD is prevalent in the service. Suicide is prevalent. Health and safety issues, sudden cardiac arrest, plus all of the injuries that go along with the job. There are a lot of resources out there, but not a lot of application. We’re talking about it, but nobody’s really doing much about it.

To maintain the kind of culture you’re striving for, where should resources be allocated?
Spend more time and money on wellness resources. Funding should be allocated toward the education of what exactly is health and fitness. Even just getting fire departments to talk about PTSD and nutrition and get people to talk more about fitness and health and wellness and what they should be doing to improve it.

Departments will spend thousands to get chiefs to come in and talk about fire attacks and behavior but they don’t allocate any of those funds to health and fitness to make people more aware of it. By simply bringing a few pieces of fitness equipment into the firehouse shows your staff that you’re making the commitment to fitness.

Leadership needs to start stepping up, including chiefs. Prevalent people in the industry need to step up and say this is important and place emphasis on it. Chiefs need to be leaders and set the example. It doesn’t have to be extreme but they need to be aware that they can be the ones that set a program in place. Lead by example and be open. Don’t be a dictator. Find resources that are out there even if you’re a small department. Set an example. Start providing resources around the firehouse. It can be cheap stuff, like foam rollers.

Go out into the community. People believe in helping and giving back to the fire service and could help with the promotion of health and fitness. Firefighters are highly motivated and very competitive. We had a “Fit for Duty” challenge where crews can challenge each other and set weight loss goals. Let’s say that everyone puts in $10 and the winning crew gets the money. Make the challenge to change the culture and be that leader. There are resources and things you can do that don’t cost a lot of money but that can get people involved. If 20-30 people in a department of 100 participate in a challenge with no money out of pocket, that can really change a culture right there.

What are the basic steps to sustaining a healthy and fit lifestyle?
Drink more water. The more hydrated you are, the more actual fluid your blood is which makes it easier on your heart to do work. If you’re not hydrated, the blood is thicker and the heart works harder to circulate blood.

Work on core and flexibility training. The number one cause of early retirement is lower back pain and back injury followed by the shoulders and knees. The chances for injuries in this profession are high but being in better shape can lead to a quicker recovery.

Build a good cardio base. Get to the point where you’re doing intervals that mimic the spike in cardiac stress that you go through on the job. Help build that cardiovascular base.

Full body training. How often during a fire have you ever done a bench press? On the fireground, you’re never isolating anything.

Eat like an athlete would. Change the diet up. Stop eating like we traditionally do in the firehouse. Eat more fruits and veggies, no processed foods, and prepare meals ahead of time. Think of what you’re going to eat ahead of time. Got to be ready.

What is the culture like in the firehouse when it comes to dieting and nutrition?
Portions in the firehouses are huge. We usually eat on big platters because you don’t want to run out. My suggestion is to serve on smaller plates because it’s all about perception. A big plate with a lot of food creates the idea that “oh, I only ate one plateful so I have to go back and get more.” But if you have a small or medium plate, then your body and mind perceives it differently and tells your body that you are fuller.

Avoid highly processed foods, bagged foods, and packaged foods while including natural, one-ingredient foods. Always have vegetables and fruits available. I won’t throw sweets away because I don’t want to be “that guy,” but I’ll put them in the cupboard so it takes effort to get to them. Then I’ll leave celery and peanut butter with some orange slices on the table and, believe it or not, most of that stuff gets completely eaten. If you make it more work to get the bad stuff and you put some good stuff there, chances are they’ll take the good stuff.  Smaller portions, natural foods, and limit the sugars. 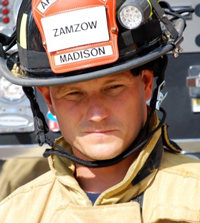 About the Author
Aaron Zamzow is a firefighter and EMT for the City of Madison Fire Department in Wisconsin. He is also a degreed personal fitness trainer and author, as well as the owner of Fire Rescue Fitness, a company dedicated to creating products and blogs focused on keeping firefighters, EMTs, and paramedics in top physical condition and “fit for duty.” He has almost 10 years of experience as a firefighter/EMT and another 20 as a fitness expert, training with elite athletes and studying with some of the top trainers in the world.

TargetSolutions’ All-New Course Wrapper Offers a Sleek, Mobile-Friendly Experience
Two Popular Courses in TargetSolutions’ Training Catalog for Water Professionals Undergo Enhancements
Recent Posts
Categories
0
0
1
3
We use cookies to ensure that we give you the best experience on our website. By continuing to use this website, you agree to the Terms and Agreements in our Privacy Policy.OKPrivacy policy